Escape The Room And Win Money?

We all love escape rooms, and the premise is usually the same.  Get locked in a room, follow the clues to unlock doors and locks.  Find codes to open boxes, and in the end…. escape, hopefully in record time. 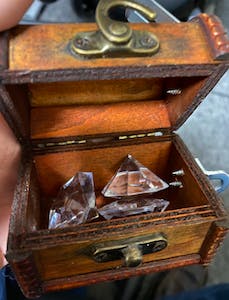 Image of the missing jewels

But what if we flipped the script?  What if, in addition to escaping the room, you also had the option to uncover a mystery?

This is exactly what we have just added to our Motel Nightmare!   As is normal, you find the clues to escape the room.  but in addition, there is a secondary set of clues that lead to stolen jewels, hidden in the motel.  Finding the jewels is optional, but if you choose to find the jewels, and escape the room, you win a $200 reward!

The story is this…

Recently, a guest at the worst motel in Loganville was arrested in the middle of the night.  This criminal was suspected of stealing a collection of gems, which have not been recovered.  It is believed that the gems were

hidden in the motel room, but after a police search of the motel, no jewels were recovered.  The police are offering a $200 reward to anyone that can find the missing jewels.

Can you recover the jewels and escape the motel in 60 minutes or less?

Want to give it a try and win the reward?